Currently before Spain’s Senate is the Ley Orgánica de protección de la seguridad ciudadana (“Public Security Law”). This bill has already passed through the lower house of Parliament, Congreso de los Diputados, and is expected to soon pass through the Popular Party controlled Senate. The Public Security Law has come under great scrutiny with opponents referring to it as the “gag law” because a significant portion of the law restricts public protest. However, this article is going to focus on the equally, if not more so, problematic portion that would legalize the summary return of migrants crossing into Spanish territory. This article will briefly summarize the contextual and legal issues related to the concept of “rejection at the border.”

To understand why Spain would introduce a bill like this, it is important to know a little background on the

issue. Between 2012 and 2013, Spain saw a 49 percent increase in the number of persons entering the enclave cities of Ceuta and Melilla. Additionally, applications for asylum in Spain increased to 4,502 in 2013, compared to 2,544 in 2012. The numbers of persons housed at the Melilla center gives credence to the mass numbers of persons that Spain is now trying to manage. As of June 12, 2014, the center housed 2,161 persons, which is four times its capacity of 480 persons. Primary increases in migrants are coming from Mali, Central African Republic, and Syria.

Over the last year, there were roughly sixty-five pre-dawn attempts by hundreds of migrants to storm the barbed wire fences separating Ceuta and Melilla from Morocco. Amnesty International reported that Spain is using unlawful deportations and reported accusations of excessive use of force by border guards in this region. Many who reach the fence surrounding Melilla must wait on the fence until the Guardia Civil force them down and return them to Morocco. For example, on February 2, 2015, the Guardia Civil summarily returned about 100 migrants to Morocco. Additionally last month, Moroccan forces completed a massive raid of the makeshift mountain camps outside Melilla in an effort to stop the attempts to cross the Spanish border. This capture and release effort resulted in migrants being released in the southern regions of Morocco.

The implementation of the Public Security Law would allow Spain to formalize the summary return of migrants, a violation of international law. While it should be recognized that the law does create additional protective procedures to try to prevent violations to international laws, it is questionable whether these procedures would have any effect on ground behavior. Spain is already a signatory of Convention relating to the Status of Refugees and the Convention Against Torture. Both of which enshrine the international principle non-refoulement, prohibiting the return of migrants when they would be subject to persecution or torture in their nations of origin. Without procedures in place to process migrants that cross the border, Spain is seriously risking violating these Conventions.

Numerous international organizations have spoken out against this law and have attempted to encourage Spain to look to other options. Nevertheless, with the Popular Party controlling the Senate, it is probable that the bill will pass; at least some version of it. This seems particularly true given Spain’s interior minister, Jorge Fernández Díaz’s, eagerness to have the summary expulsion law. Mr. Díaz does not want to consider migrants to have entered Spanish territory until they have crossed the “police line.” It is unclear what action, if any, the international community would take, but with legal concrete action by Spain, some evaluation may be necessary.

Alison Haugen is a 2L at Denver University Sturm College of Law and a Staff Editor on the Denver Journal of International Law and Policy. 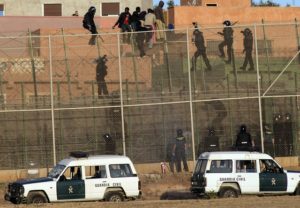