Schengen Fails Under Weight of Migrant Influx as Sovereignty Trumps

The migrant crisis is forcing tensions between the free-movement created by the Schengen Agreement and notions of state sovereignty.  The crisis has brought into questions of European solidarity as countries force migrants from one country to the next.  In practice the EU’s Dublin Regulation, which requires that a migrant’s asylum claim be processed in the European country where he/she first arrives, has been de facto suspended.  Some have suggested, which this author agrees with, that the Dublin Regulation needs to be completely revamped to respond to the current crisis.

Just this weekend, the Hungarian government has accused Croatia of breaching international law by failing to register migrants.  At the same time, Hungary is currently building a razor wire fence in an attempt to stem the flow of migrants into the country.  Additionally, a number of migrants who reached Austria via Hungary have told the BBC they had not been registered in Hungary either, simply driven in buses across the country and told to walk over a railway line into Austria.

Meanwhile, in the last 24 hours, Austria has seen the arrival of tens of thousands of migrants.  Migrants were sent first to Hungary by Croatia, who stated it was unable to accommodate the 20,000 plus migrants who had arrived since Wednesday. While initially welcoming them, Croatia later state said it was unable to cope, sending them to Hungary.  Hungary then turned to Austria, while accusing Croatia of breaking rules by failing to register migrants. 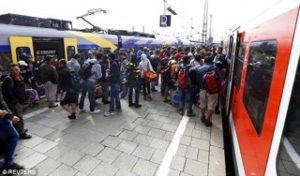 Migrants queue as they wait to board a regional train at the main railway station in Munich, Germany. (Reuters)

Countries like Germany, which have welcomed refugees and have offered to take in records numbers of migrants are now finding that such offerings are untenable.  In his State of the Union speech on 9 September the EU Commission President, Jean-Claude Juncker, called free movement under Schengen “a unique symbol of European integration”.  However, such integration is now being tested.  While Mr. Juncker called for “better joint management of our external borders and more solidarity in coping” with the influx, the reality is that few countries have demonstrated solidarity in order to find a durable solution to the crisis.

While EU nations desperately guard their sovereignty and shift the burden from one country to the next, the conflicts in Syria, Iraq, Afghanistan, Libya and Eritrea continue raging, forcing migrants to choose between enduring extremely dangerous and dire situations at home, or leaving their homes and embarking on perilous journeys towards what they hope will be safety. Illustrating the dangers many migrants face in their flee towards safety is a recent warning from Croatia of the risk of landmines if migrants venture off the main roads in border areas, where Croat and Serb forces clashed in the early 1990s. Yet many migrants are still reported to be entering Croatia across those dangerous fields in an attempt to bypass border controls.

One migrant who made it safely to Austria told the Associated Press, “I feel like I’ve been born anew. It makes no difference whether I am delayed, whether I stay here two days. The important thing is that I’ve finally arrived and that I am now finally safe.”  However, the travel options for migrants remain dangerous, with the Greek coastguard reported that a five-year-old girl died when the boat taking her from Turkey to the Greek island of Lesbos sank, and at least 13 other migrants on board are missing.

What is clear is that the conflicts in countries such Syria, Iraq, and Afghanistan shows no signs of stopping, and as a result, migrants will continue to seek safe haven in Europe.  With attempts such as the EC’s recent proposal for mandatory quotas to distribute 160,000 migrants EU-wide being rejected, countries need to do much more to address this issue which will not disappear any time soon.  However, the problem is incredibly complex, as migration expert Demetrios Papademetriou, president of the Migration Policy Institute Europe has suggested.

Papdemtriou stated recently that to address the migrant crisis, Europe will have to invest in creating real opportunities for refugees so that they can stay in neighboring countries, make a livelihood, get an education, and access health services. He suggests further that Europe should work with countries that are a launching pad, by targeting three or four key countries on the pathway from countries experiencing large patterns of migrations, and do as much as it takes to get their cooperation — to stop traffickers, to create opportunities for people to stay, and create a safe pathway.  This of course requires the cooperation of European countries and governments, something that has been in short supply during the crisis.  This is not to oversimplify the fact that governments have genuine security concerns, and real concerns regarding resources both economic and otherwise, and this crisis is incredibly complicated.  There is no “easy” solution.  However, what this situation requires is a strategic response, which cannot be achieved without the cooperation of affected countries, including a possible revamp of the Dublin Regulation and an open dialogue on the functioning of the Schengen Agreement within the framework of the current crisis.

Emily Boehme is a 3L at University of Denver Sturm College of Law and Senior Managing Editor on the Denver Journal of International Law and Policy.

PrevPreviousWhen Law is not Enough: How to Eradicate Female Genital Mutilation
NextGrading the United Nations at 70 years oldNext