The Protestant Ethic and the Spirit of Slavery

If “idle hands are the devil’s workshop,” and if our own hands are not idle when we use machines and other property to do our work for us, then does the resulting prosperity guarantee our salvation? Though the title of this blog is not an entirely fair play on Max Weber’s, The Protestant Ethic and the Spirit of Capitalism, the ownership of human beings as commodities certainly relates to the drive for profit because there is little doubt that unfettered capitalism itself is the result of slavery. However, the intention of this blog is not to point out the good and bad aspects of capitalism; rather, the intention is to point out the prevalence of modern day slavery and how easily we can end it by changing our views on what “success” entails, and by increasing racial and gender equality. We can accomplish this by simply becoming aware of what is happening and how we are each contributing to its continuance.

Modern slavery is defined within International Law as: “the status or condition of a person over whom any or all of the powers attaching to the right of ownership are exercised.” In plain English, the person is held against their will under the constant threat of injury or death and is forced to work without pay. Slavery exists in every country in the world and includes: sex trafficking, domestic servitude, bonded labor, child labor, and forced labor, among others. Today, it is estimated that there are 35.8 million people held in slavery worldwide, although the actual number is likely much higher.

Increased globalization amplified the profitability of slavery through cheap labor in various parts of the world. Many of the items we use daily, such as cotton, sugar, cocoa, rugs, and bricks are likely to have connection to slavery. Once these items reach the global market, it is difficult to track their source. 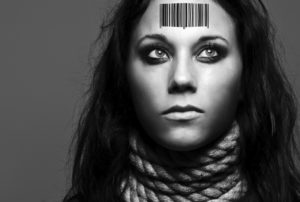 cheaper today than at any other time in history. They are usually young because the elderly and very young cost more to maintain and cut into revenue. Experts on modern slavery, such as Kevin Bales, describe them as “Disposable People” because they are merely thrown away or killed when they no longer produce enough profit for the owner.

Despite numerous treaties and law abolishing slavery throughout the world, slavery remains. Because of this, we must go beyond the anti-slavery laws themselves and pay closer attention to laws which prohibit discrimination based on race and gender. This is because these are the groups at the most risk of poverty due to discrimination, thereby placing them at increased danger of being taken into slavery.

There are many things we can do to help end slavery as individuals. For instance, we must be aware that it may be happening right next door to us, that we may be purchasing products that are connected to slavery, and we must be willing to pay more for certain products since “low prices” can be deceptive. For instance, with chocolate, low prices make slavery more prevalent because the farmers cannot pay for the labor and the company either goes under or the owners begin enslaving people to produce the cocoa. This is one reason why boycotting certain products can actually contribute to slavery. In other cases, such as carpets and rugs, boycotting is a viable solution as is paying extra for rug labels which provide some assurance that the carpets were not produced through the use of slave labor.

If we remain locked in the iron cage and continue placing profit above all else, believing that “whoever dies with the most toys wins,” we will eventually be unable to continue blinding ourselves to the actual cost.

PrevPreviousMigrants seen as Economic Detriment to Greece and Benefit to Germany
NextThere is Water on Mars, Now What?Next