A comparison of maternity rights across the world

On October 6, 2015, Washington D.C. councilmembers introduced the Universal Paid Leave Act of 2015, which guarantees 16-week of paid family leave for any employed D.C resident.  The legislative process could take months, but if passed, the law would allow both full-time and part-time D.C. employees to take time off to tend to a newborn, care for a sick relative or recover from serious illness. The standard that would be set by the nation’s capital is truly revolutionary compared to the existing laws and policies across the country. Currently, California, New Jersey and Rhode Island, Massachusetts  are the only states that offer taxpayer-funded medical and family leave allowing eligible employees to take up to six weeks of partially paid time-off.

In fact, the United States is the only industrialized country that does not have any federally mandated paid leave for its citizens. It is also one of four countries, along with Liberia, Sierra Leone, and Papua New Guinea, with no paid maternity leave laws. Maternity leave policy in the United States is directed by the Family and Medical Leave Act (FMLA), which was issued in 1993. The Act offers up to 12 weeks of unpaid leave during a calendar year to care for a newborn, adopted child, sick relative, or recover from serious health condition. But even the entitlement to a 12 weeks’ time off is subject to a host of restrictions and qualifying conditions: the provisions apply only if the person works for an employer with 50 or more full-time employees, have worked for the employer for at least 12 months, and have worked at least 1,250 hours in the past year. Because taking unpaid time off can be financially burdensome, in many households, especially in low-income families, mothers often have to make a painful decision to stay at work or take much shorter leave after a birth of a child.

Maternity policies may vary around the world but they all (except for the United States andPapua New Guinea) recognize many benefits of offering paid parental leave and provide minimum level of support to new mothers. According to International Labor Organization, maternity leave policies in the vast majority of countries guarantee at least 14 weeks of time off at a “rate of at least two-thirds of previous earnings, paid by social insurance or public funds”

For instance, in Demark, the government adopted the Maternity Leave Act that guarantees parents a total of 52 weeks of paid leave including pregnancy leave for up to four weeks off before the child arrives. Sweden went a step further: parents in this country are entitled to 15 months of paid leave that can be shared between mothers and fathers; parents also receive 80 percent of their regular wages and are allowed to work only six hours per day until their child turns eight. Under German law, both mothers and fathers are well protected from loss of employment until their child turns three. Besides, a mother can take 14 weeks off for maternity leave at 100 percent pay.

Mothers in Italy are offered 5 months of leave paid at 80 percent of salary. Women employees also have a flexibility to divide their time off by taking one month off before birth and four months after the birth of a child.

Under Canada Labor Code female employees can take between 17 (if they worked for a company for at least six months) and 52 consecutive weeks of paid leave. Maternity leave in Russia and many other CIS (Commonwealth of Independent States) member countries consists of 70 calendar days prior to a birth and 70 days thereafter; it is paid at the rate of 100 percent of the average monthly salary. In Iran new mothers are entitled to 90 days of maternity leave and receive two-thirds of their regular wages.

All these countries have long recognized the need to provide a support for working families in the form of paid leave. Parental leave benefits the families, businesses, government and society in general. It gives parents opportunity to establish a strong bond with an infant during the first months of life, and allow a healthy childhood development.  Paid leave also strengthen employee loyalty and increases the likelihood that employees will return to their employers after having children, and continue advancement in their career. As a result, companies that offer paid parental leave would be able to save money on turnover costs and retain talented employees. 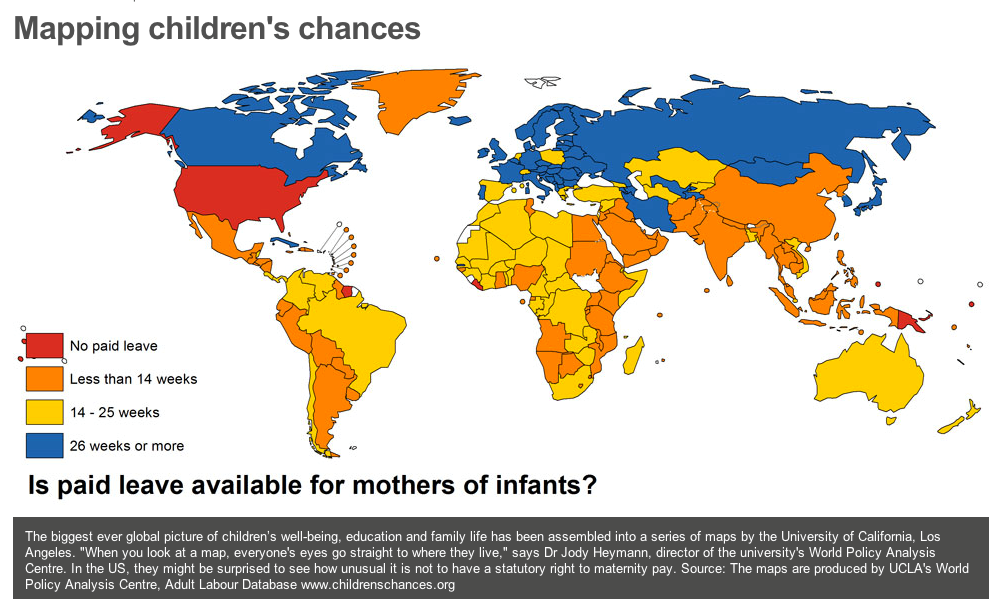