The Smart Grid: How the International Community Is Combating Climate Change (Part 1 of 3)

“Tomorrow’s power systems are expected to cover an increasing demand for electricity in an affordable, sustainable and reliable way. New elements like highly distributed generation or a much closer interaction between consumers and generators will contribute, but require innovative solutions across traditional industry borders.” – Jochen Kreusel, Head of ABB’s Smart Grids Industry Sector Initiative

The international community is undoubtedly in consensus that climate change is occurring and the earth is warming largely due to human actions.  In fact, since the United Nations Framework Convention on Climate Change in 1992 most nations recognize the need to collaborate on how to stabilize global greenhouse gas emissions.  Many countries, including the United States (“U.S.”), the European Union (“E.U.”), and China, have agreed that all countries have “common but differentiated responsibilities” in remedying climate change that differ based on their economic and social environments and historic and present generation of emissions.  Top emitting countries, like the U.S., the E.U., and China are adopting strategies, like the Smart Grid, to become more energy efficient and reduce energy consumption.[1]

The Smart Grid’s dynamic nature allows for intermittent alternative energy sources to be more easily integrated into the traditional, existing electricity grids.  As countries consider shifting away from fossil fuel-based energy to renewable energy sources, Smart Grids use digital, interactive technology that allows integration of renewable energy into the grid to be used as power.  Because renewable energy is “virtually [a] free” energy source, renewables are considered a threat to the traditional grid, which is regarded as rigid and unreliable in an era where electricity demand is only increasing.[2]  By using less energy, consuming energy more efficiently, and integrating more renewable, lower emission energy sources into the grid, the Smart Grid is a promising component in the international community’s fight against climate change.

What is the “Smart Grid”?

No universal definition of “smart grid” exists, but the general concept is widely accepted.[3]  One U.S. energy company, Xcel Energy, has an illuminating definition.  To Xcel, the Smart Grid is “an intelligent, auto-balancing, self-monitoring power grid that accepts any source of fuel (coal, sun, wind) and transforms it into a consumer’s end use (heat, light, warm water) with minimal human intervention.”[4]

Using the U.S. as an example, the dominant electric grid, which was developed in the 1890s, is centralized and an electricity provider controls it.  The provider, through its system operators, must match generation of electricity with demand on an almost minute-by-minute basis.  It is a one-way, utility-to-consumer process.

By contrast, the grid becomes “smart” as a result of “the digital technology that allows for two-way communication between the utility and its customers, and the sensing along the transmission lines.”  Smart Grids are premised on integrating renewable energy sources into the grid and increasing energy efficiency, which means less energy will be used and the energy that is used will come from clean, fossil-fuel free sources.  Therefore, Smart Grids have a positive effect on climate change because they reduce emissions that contribute to global warming.

Powered by “today’s twin challenges” of reducing greenhouse gas emissions in an electricity hungry world,[5] Smart Grid development is largely based on the need to integrate renewable sources of energy into the grid and mitigate effects that emissions have on climate change.[6]  The Smart Grid attacks the challenges by also promoting energy efficiency, which has been called “the fifth fuel.”  It attempts to provide energy that is more reliable and more efficient.

For example, electricity companies would be better able to detect power outages and prevent wide-scale blackouts because the Smart Grid’s electric system is digital and can communicate with the digital meter on one’s home.  In short, the company response time to such situations would be faster.  We live in an age where electrical grid failures, and resulting blackouts, are alarmingly common and more and more consumers continue burdening the grid with their voracious appetite for electronics.  So, the Smart Grid’s responsiveness to consumer needs makes energy more reliable.

A Critical Component: the “Smart Meter”

The Smart Meter is one of the key devices that allows the Smart Grid to increase the two-way communication between a utility company and the consumer that is characteristic of the Smart Grid.  In contrast to analog meters that attach to the outside of most U.S. homes, “smart” meters are digital.  Therefore, they allow for the grid to be responsive to fluctuating energy prices and supply and demand as those changes occur in real time.  This is significant because they have the potential to decrease “the high cost of meeting peak demand” and render peak power plants unnecessary.  Removing these power plants, which typically use fossil fuels, undoubtedly helps mitigate climate change.

Using an energy management system, home residents may view their smart meter data and electrical consumption information on personal computers or cellular phones.  The system enables residents to automate their energy usage according to “real-time information and price signals from [their] utility” so they only run their high-efficiency dishwashers or washing machines, for example, during times prices are low.  These types of household appliances (e.g., refrigerators, hair dryers, computers, washing machines) represent about 60-90% of energy consumption in the residential sector so this dynamic communication is essential to delivering cost-effective, reliable, and energy-efficient electricity to consumers.[7]  In the U.S., the number of consumers checking their energy usage on mobile devices has increased and these devices are crucial in engaging consumers as the Smart Grid gains more traction in 2014. 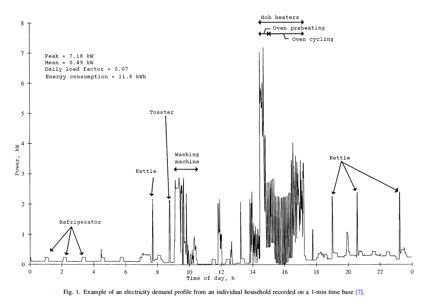 Currently, U.S. technology is capable of measuring the power in kilowatt-hours of specific devices within homes.  So, in gathering home energy data, smart meters may be capable of exposing one’s personal details.  The meter may reveal data, called consumer-specific energy-usage data, about when the occupant is not home, whether one has a home alarm system, or whether one is toasting bread in the morning.  More detailed consumer usage data benefits the Smart Grid because if electric companies know exactly how much energy specific appliances need, then they are better able to meet a household’s electrical demand.  This data also allows consumers to program their appliances to turn on when energy is the cheapest.

Presently, however, the “state of the art, in terms of the granularity of data collected by utilities using advanced metering, cannot yet identify individual appliances and devices in the home in detail, but this will certainly be within the capabilities of subsequent generations of Smart Grid technologies.”  Nonetheless, as the smart meter develops to reach its full potential for consumers and utilities, it will necessarily have to detect specific appliances being used at specific times of day for specific amounts of time.[8]  The Smart Grid’s success depends upon this real-time consumer electricity data.

The Smart Grid is the 21st Century’s electricity grid.  Our society is increasingly more interactive, dynamic, and digital in nature so an electrical grid that also possesses these characteristics is only fitting.  The global population is increasing, and the U.S, the E.U., and China make it clear that countries are taking action to ensure their present and future generations have access to clean, efficient, and reliable electricity.