The Smart Grid: How the International Community is Combating Climate Change (Part 2 of 3)

Part II: What “Smart Grid” Means in the United States, the European Union, and China

No global definition of Smart Grids exists,[1] but the basic concept is universal. One scholar has defined Smart Grids as “electricity system[s] that [use] information technology (IT) to connect those who generate and transmit electricity with those who consume it.”  The United States (“U.S.”), the European Union (“E.U.”), and China share similar developmental rationales, which include increasing energy capacity, reliability, efficiency, affordability, security, and global competitiveness; decreasing energy-related environmental impacts; and integrating renewable energy into the grid.[2]  With those considerations in mind, the U.S. and the E.U. most similarly define the Smart Grid, and China has a slightly different perspective.

Currently, the U.S. electrical grid is centrally planned and fossil fuels predominantly feed it.[3]  The utility controls the process in a centralized manner when providing electricity to consumers.  One way the grid becomes “smart” is when appliances and electricity meters on homes and businesses become digital allowing for two-way interactive communication between utilities and consumers.  Therefore, electricity generation becomes distributed from multiple energy sources, which is more efficient.  Additionally, the Smart Grid includes “a broad array of electric system capabilities and services [that are] enabled through pervasive communications and information technology, with the objective to improve reliability, operating efficiency, resiliency to threats, and our impact to the environment.”

The E.U. also has a centrally planned grid where fossil fuels dominate.[4] The E.U.’s Smart Grids Task Force (“SGTF”) defines the Smart Grid as “an electricity network that can cost efficiently integrate the behaviour and actions of all users connected to it – generators, consumers and those that do both – in order to ensure [an] economically efficient, sustainable power system with low losses and high levels of quality and security of supply and safety.”  It also focuses on the dynamic communication between consumers and utilities through “intelligent metering and monitoring systems.”  Smart Grids in the U.S. and E.U. rely upon smart meters to achieve energy efficiency. 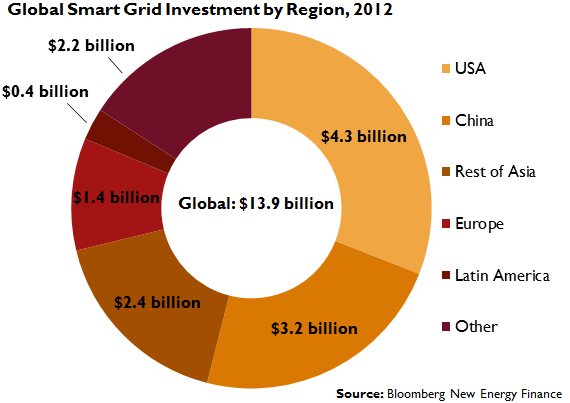 Motivations for Adopting the Smart Grid

As top emitters and energy consumers, the U.S., the E.U., and China have strong motivations for adopting the Smart Grid and have already implemented some of its components, like the smart meters.

The current grid’s primary function is to ensure lights stay on, but modern concerns include reliability, efficiency, affordability, and the environment.  The U.S. is the world’s largest energy consumer, and in 2009, energy from fossil fuels totaled more than 50% of energy consumption while renewables made up about 9%.  Also, the U.S. represents about 4% of the global population, but emits nearly a quarter of its greenhouse gases.  Based on 2014 data, the U.S. population hovered over 318,000,000, and its 2011 electricity consumption per capita was 13,246 kWh compared to 3,298 kWh in China and 5,516 kWh in the United Kingdom.

Thus, President Barack Obama suggested clean energy would compose 80% of the U.S. energy mix by 2035.  He proposed increasing clean energy production twofold by 2020 while encouraging energy efficiency[6] and confronting climate change.  The U.S. strives to use Smart Grids “to reduce energy demand by 20 percent, improve system efficiency by 40 percent, and incorporate 20 percent of renewables for electricity capacity by 2030.”

Smart Grids began in the U.S. around 2001.  Congress enacted the Energy Independence and Security Act of 2007 (“EISA”), which declared the U.S.’s modernization of its electrical transmission and distribution, to address these new concerns in the form of the Smart Grid.  EISA established the Smart Grid Task Force “to insure awareness, coordination and integration of the diverse activities” of Smart Grid practices, policies, and technological components.  EISA also directed each state’s electric utilities and other related entities to consider investing in and implementing the Smart Grid.  Thus, states could require utilities to implement aspects of the Smart Grid.  For instance, some utilities must replace obsolete residential meters with smarter, digital ones.  EISA directed the National Institute of Standards and Technology (“NIST”) to organize the Smart Grid’s interoperability framework to ensure consistency of all related entities and technologies.

In 2005, there were about 150 million traditional energy meters in the U.S., but less than two million were “smart.”  In 2009, President Obama injected $3.4 billion into the Smart Grid Investment Grant awards for system investments, trial implementations, and capacity building.  Private industries matched this funding making for a total of $7.8 billion.  Estimates now suggest that by 2015, 50 million more smart meters will be implemented.  A few states, like California7 and Maryland, have already widely implemented smart meters.  Many cities have Smart Grid projects.

In 2006, the European Community (“the Community”) recognized a need for energy efficiency and renewable energy to assuage energy usage, greenhouse gas emissions, and climate change effects, and to help wean the Community from reliance on foreign energy sources.  Nuclear and coal dominated the electricity energy mix.[7]  Therefore, the Community enacted the energy end-use efficiency directive to achieve those needs.  The directive stated that human activity in the energy sector had caused around 78% of greenhouse gas emissions in the Community, and therefore, Member States were required to “adopt national indicative targets to promote energy end-use efficiency.”  Additionally, the directive required each Member State to complete an action plan outlining strategies for satisfying the directive.

In 2009, the European Commission first mentioned smart meters in a mandate for establishing E.U. standards “that [would] enable interoperability of utility meters (water, gas, electricity, heat), which [could] then improve the means by which customers’ awareness of actual consumption [could] be raised in order to allow timely adaptation to their demands.”  In the Third Energy Package, the Community specifically addressed Smart Grids in efforts to modernize its electrical distribution system by decentralizing generation and increasing energy efficiency.  This directive described that implementing smart meters to 80% of the E.U. by 2020 was the most pivotal stride for Smart Grids.

The European Commission tasked the SGTF with advising it on policy and regulations to implement Smart Grids at the community level.  The SGTF organized expert groups that considered creating and revising standards, creating proposals for smart meter data privacy, and defining regulatory recommendations for business models that encourage grid deployment.

In 2011, the European Commission mandated E.U. standardization organizations to improve upon and create Smart Grid standards by 2012’s end.  This mandate recognized that Smart Grids are essential to the Community achieving its 20/20/20 targets.  The targets are: (1) reducing greenhouse gas emissions in the E.U. to a minimum of 20% under 1990 levels, (2) reducing “primary energy use compared with projected levels” by 20% using energy efficiency measures, and (3) “guaranteeing high security, quality and economic efficiency of electricity supply in an open market environment.”

The Energy Roadmap 2050 reiterated these goals in light of a “sustainable and secure energy system.”  A smarter grid promotes energy efficiency and integrates renewables, which are more intermittent in generation than fossil fuels.  It also makes the E.U.’s goal of reducing emissions to 80-95% of 1990 levels by 2050 more attainable.

China is the world’s second largest energy consumer and strives to be a global contender in all respects, which includes being the alternative energy leader.[8]  With the world’s largest population at 1,317,000,000, China’s electricity consumption per capita in 2011 was 3,298 kWh.  One of the government’s goals is lowering “energy consumption per unit of GDP by 15 percent” by 2015.  Also, the Renewable Energy Law of 2005 stated a goal of a 10% renewables mix by 2020.[9]  Because China derives most of its power from coal and its electricity meters are “relatively low” quality, China is motivated to transition into cleaner energy.  Complicating the shift is that Chinese citizens are rapidly migrating from the country to cities, which increases energy demand threefold.

In its Twelfth Five-Year Plan, the government committed itself to developing “intelligent power grids” and performing system trials.  The SGCC established a strategy for creating and implementing Smart Grids by 2020:

In 2009, SGCC, the “largest State-owned utility” company worldwide, declared its intention to construct a grid that is strong and smart by 2020.  China has at least 15 city demonstration projects.  In 2010, a Chinese power company implemented various Smart Grid technologies into one smart community that included 655 homes and 11 commercial buildings.

The highly centralized structure of China’s government allows for faster policy development and implementation.  Smart Grids have enabled local governments to exercise more power over their respective regions by investing in local Smart Grid projects.  As a byproduct of China accomplishing its goal of providing strong energy countrywide, its electrical distribution and transmission system must necessarily become efficient in order to sustain that increased energy demand.

As of 2014, investments in Smart Grid technologies globally totaled $14.9 billion.  China leads the pack having spent $4.3 billion in 2013 compared to the U.S. at $3.6 billion.  Estimates state that currently China has over two times as many installed smart meters as the number of U.S. households.  Also, “Asian and European markets will drive growth through 2020, while in North America the focus will continue to shift from hardware to software as utilities look to squeeze additional value out of the vast amounts of grid data now available.”

The U.S., China, and the E.U. have acknowledged their present and future energy needs and are taking measures to ensure that their people have electricity.  However, their adoption of environmental policies and Smart Grid initiatives demonstrate that they are also taking the environment into account.  As energy efficiency technologies like the Smart Grid continue developing, the larger benefits remain to be seen through collaborative technology transfer between countries.

[5] See Jaclyn Cook, The Smart Grid: How the International Community is Combating Climate Change (Part 1 of 3), The View from Above (Feb. 25, 2014), URL to Part I (describing smart meters).