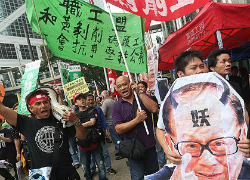 Dockworkers in Hong Kong have been on strike since March 28, protesting salaries that have remained stagnant since 2003 while the cost of living in the densely populated city has increased exponentially. In addition to unlivable wages, the striking employees have drawn international attention to their arduously long shifts, which they are forced to work … Read more