The Tragedy of Universal Jurisdiction

Picture a medieval town, 110 acres in size and populated entirely by 10 cattle ranchers. Each rancher lives on a 1 acre parcel of land that together surround a 100 acre open space used for grazing cattle.

Over time, however, as the ranchers realize this economic advantage and add additional heads of cattle to the pasture, the common land’s overall grazing capacity will diminish to the point that the land is no longer usable for any of our 10 medieval ranchers, leaving them all with less milk and meat than they would have had otherwise.

This parable, known as the “Tragedy of the Commons,” is well known to anyone who has sat through a college level economics class. It is often cited as a key rationale for the private ownership of property, illustrated in this case through the privatization of the grazing pasture that forced each herder to account for the full cost and benefit of each additional cow sent to pasture.

Other commons problems include population growth, fisheries, and pollution. In each scenario, the idea is that allocating costs and benefits in individuals – rather than in communities – is the surest way to ensure that resources are accurately valued and efficiently employed.

In its own way, the modern prosecution of pirates presents something of a commons problem, with prosecution under a theory of universal jurisdiction standing in for common grazing space and prosecution using a more direct theory of jurisdiction representing the enclosure of that common space.

Where a state prosecutes a pirate under the theory of universal jurisdiction, that state bears the vast majority – if not all – of the cost of the extradition, trial, and imprisonment of the suspect. While those costs are both real and substantial, the benefits are much less so. A prosecuting state asserting universal jurisdiction is fulfilling its international obligation to combat piracy as well as making the high seas marginally safer for international shipping traffic, but these benefits flow to the international community as a whole, in equal measure. No benefits fall discretely to the prosecuting state.

On the other hand, if a state prosecutes under territorial, nationality, passive personality, or protective jurisdiction, the costs of prosecution remain the same, but the benefits become both more sizable and more concrete. In addition to the undifferentiated benefits of a universal jurisdiction prosecution, the prosecuting state is either protecting its territorial integrity, punishing a national for committing piracy, vindicating violence committed against a citizen, or protecting its own political and economic interests, depending on the chosen theory of jurisdiction.

This brings us back to the classic commons parable involving the cattle ranchers. 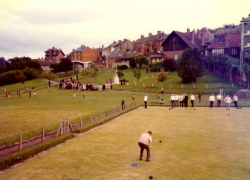 In that example, the common grazing of land led to internalized benefits and externalized costs, which in turn led to an increase in economic activity even if such activity was imprudent in the long run. When the commons was enclosed, both costs and benefits were internalized within the individual rancher, who then tended to have the “right” amount of cattle on his pasture thereby improving every rancher’s individual prospects along with the prospects of the group.

Indeed, the facts on the ground suggest that piracy prosecutions can be viewed as a commons problem. In a 2010 empirical study, Eugene Kontorovich found that between 1998 and 2009, only fourteen out of the 1,063 reported piracies in international waters resulted in a universal jurisdiction prosecution, a rate of 1.31%.

Put another way, a state is over 75 times more likely to prosecute a pirate when the costs and benefits of prosecution – rather than just the costs – fall to that state. This is exactly what one would expect under the commons formulation.

In a simpler world, one in which more jurisdictional avenues are better than fewer, the idea that a pirate negotiator who neither enters into an ex ante agreement with the pirates nor is physically present on the high seas has not committed a crime of universal jurisdiction may appear to be a hindrance to the international community seeking to put an end to maritime piracy.

Yet both facts and theory tell a different story. States are much more likely to assert jurisdiction based on the territorial, national, passive personality, or protective theories of jurisdiction than universality, and if prosecuting pirates is fashioned as a commons issue, this is exactly what economic theory would predict.

When considering jurisdictional avenues to prosecute pirate negotiators at least, less can be more.

Jon Bellish is a Project Officer at the Oceans Beyond Piracy project in Boulder, Colorado (though all of his views are his own), and he has experience in United States piracy trials. He just got on Twitter. This article is cross-posted on Communis Hostis Omnium.