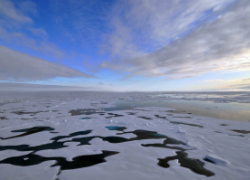 In 2007, a submersible named Mir descended over 4 km to the bottom of the Arctic Ocean and planted the Russian flag under the North Pole. The news broke all over the world and prompted fears of potential violent confrontations between arctic countries. Thus far, such fears have not been realized, but with Arctic … Read more