After a cease-fire ended the fifty day war between Gaza and Israel, Palestine wants to bring charges against Israeli individuals for war crimes and crimes against humanity. Therefore, Palestine has an important decision to make: become a state to the Rome Statute, which grants the ICC jurisdiction, or remain a non-member observer state and submit … Read more 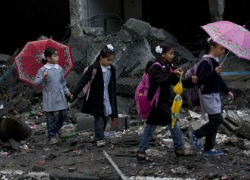