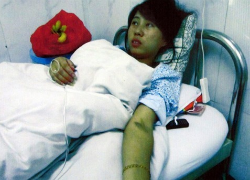 A Chinese woman who was forced to abort her 7-month old fetus has found herself in the center of international controversy after she claimed that local officials were holding her in the hospital against her will and that her husband had disappeared. Twenty-three year old Feng Jianmei and her husband Deng Jiyuan, who already have … Read more