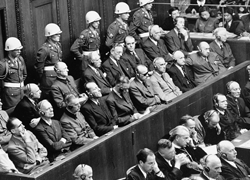 The United Nations International Criminal Tribunal for Rwanda issued its judgment earlier this summer in the case of Pauline Nyiramasuhuko et al. The Rwanda Tribunal has been working for 17 years and it has completed 50 genocide trials. Its judgments are now issued with comparatively little fanfare. But the Nyiramasuhuko judgment is extraordinary and merits … Read more